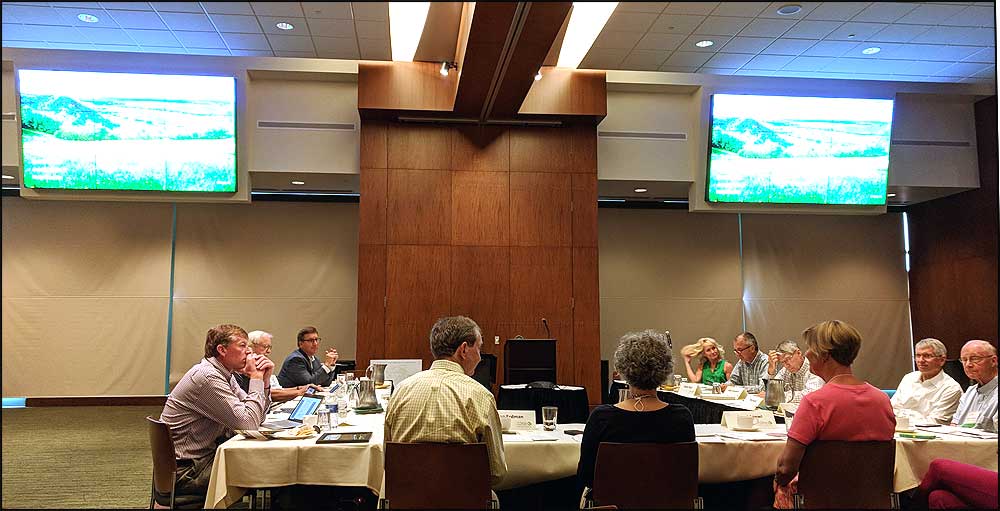 A recent meeting brought emJay and me to Door County. Being so close to Green Bay we had to spend a little time in ‘Title Town, Green Bay, Wisconsin,  USA. . . 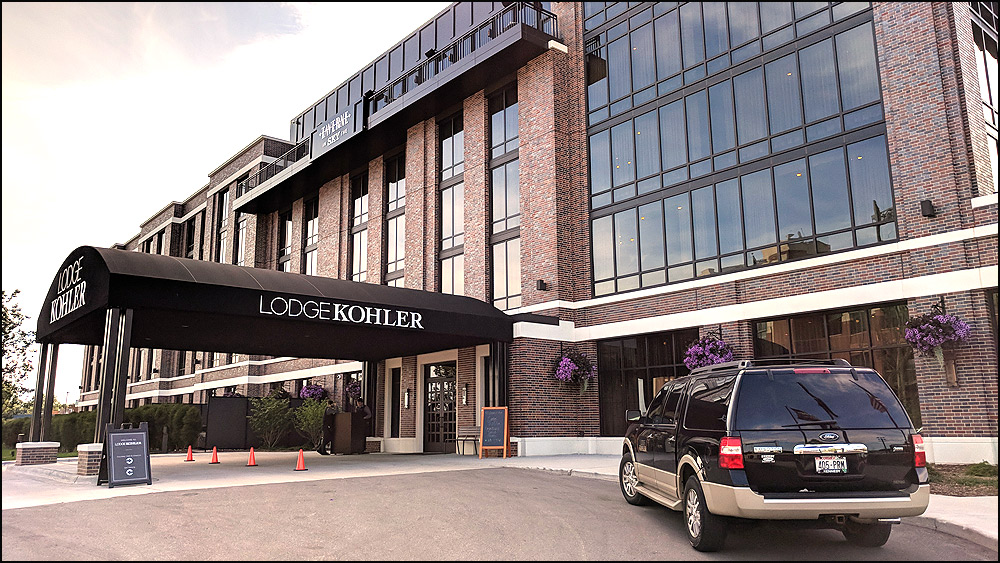 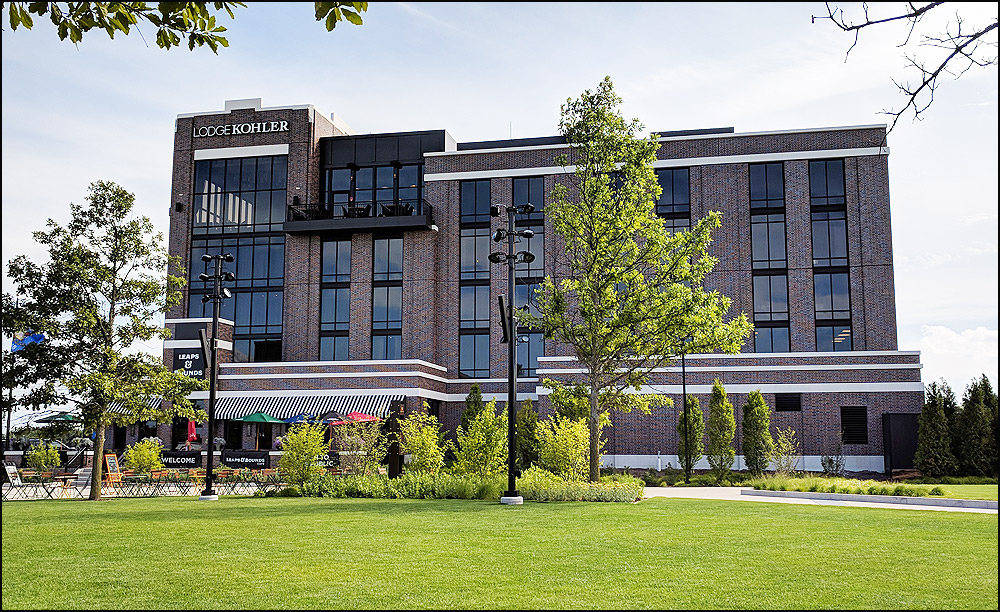 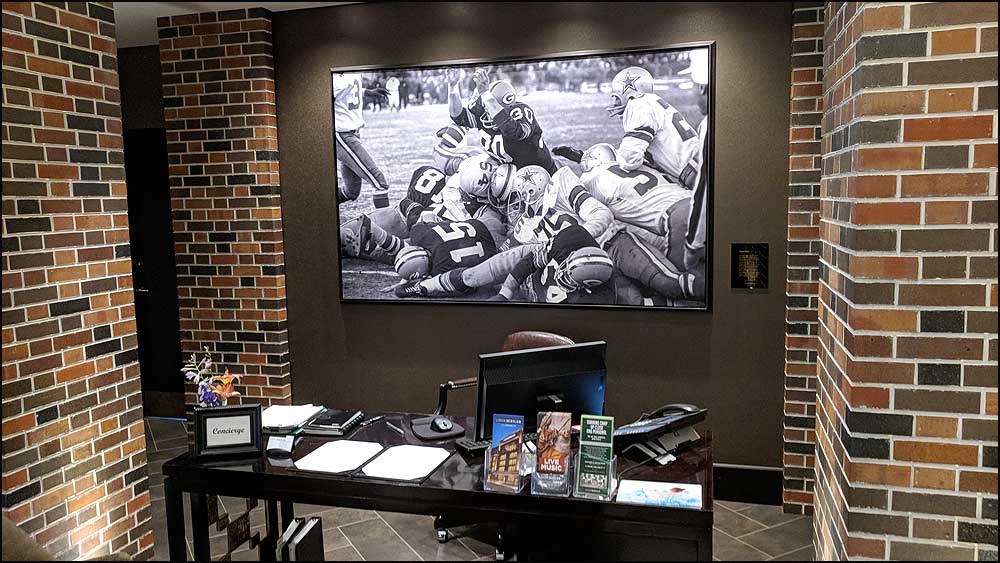 . . .  a very masculine hotel with LOTS of vintage Packers photos . 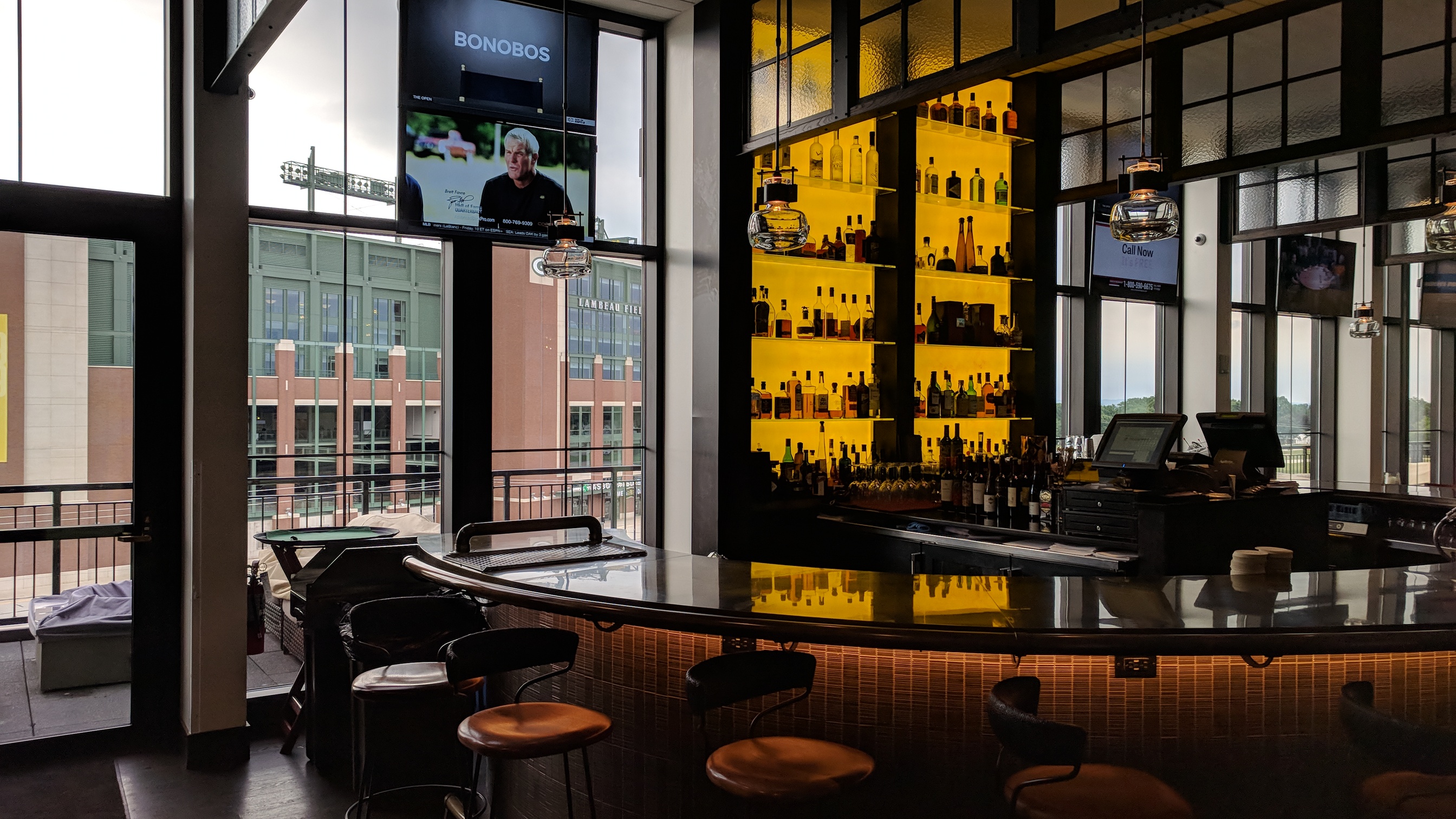 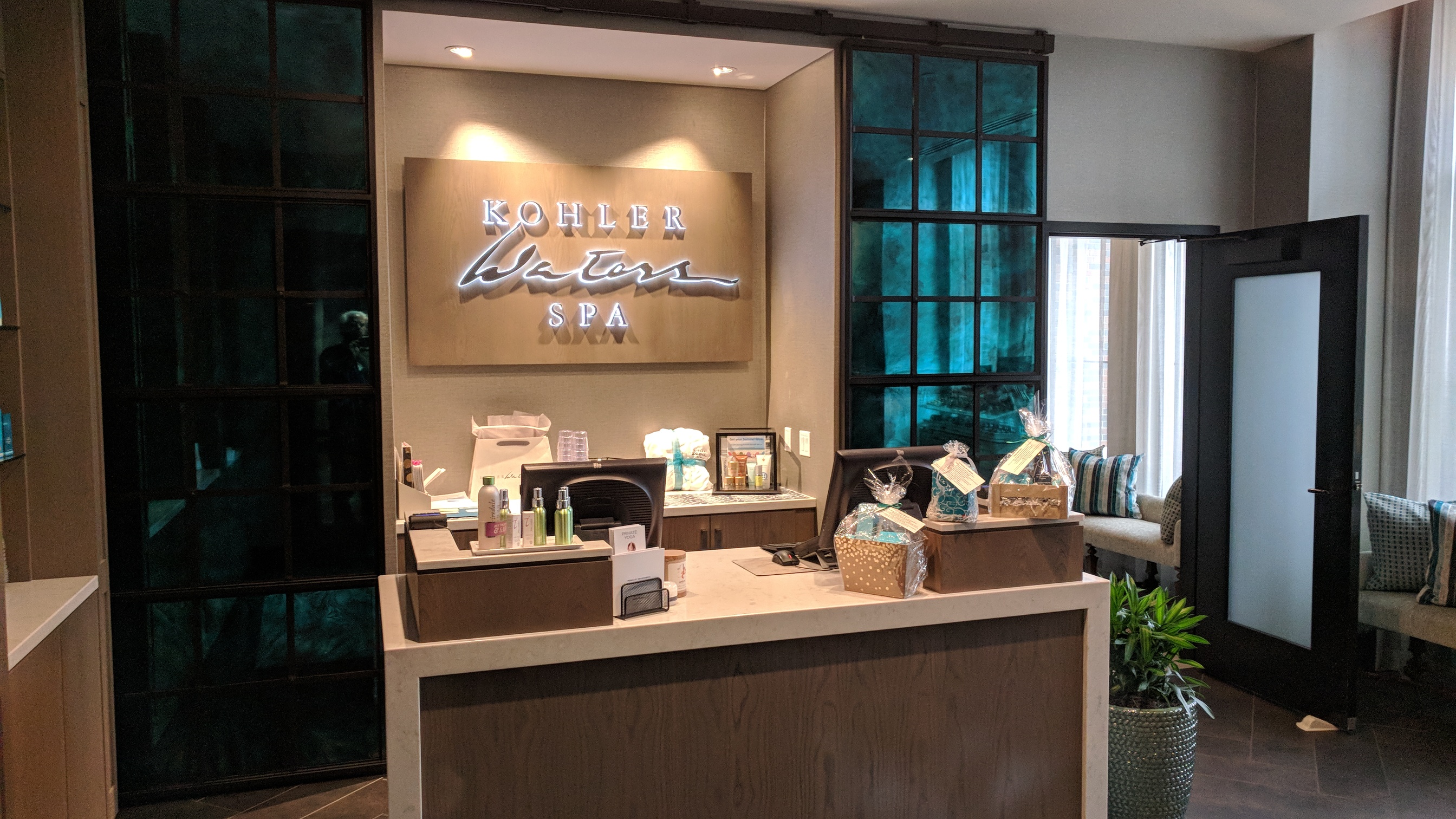 . . . very nicely appointed with lots of amenities including a traditional Kohler Spa . 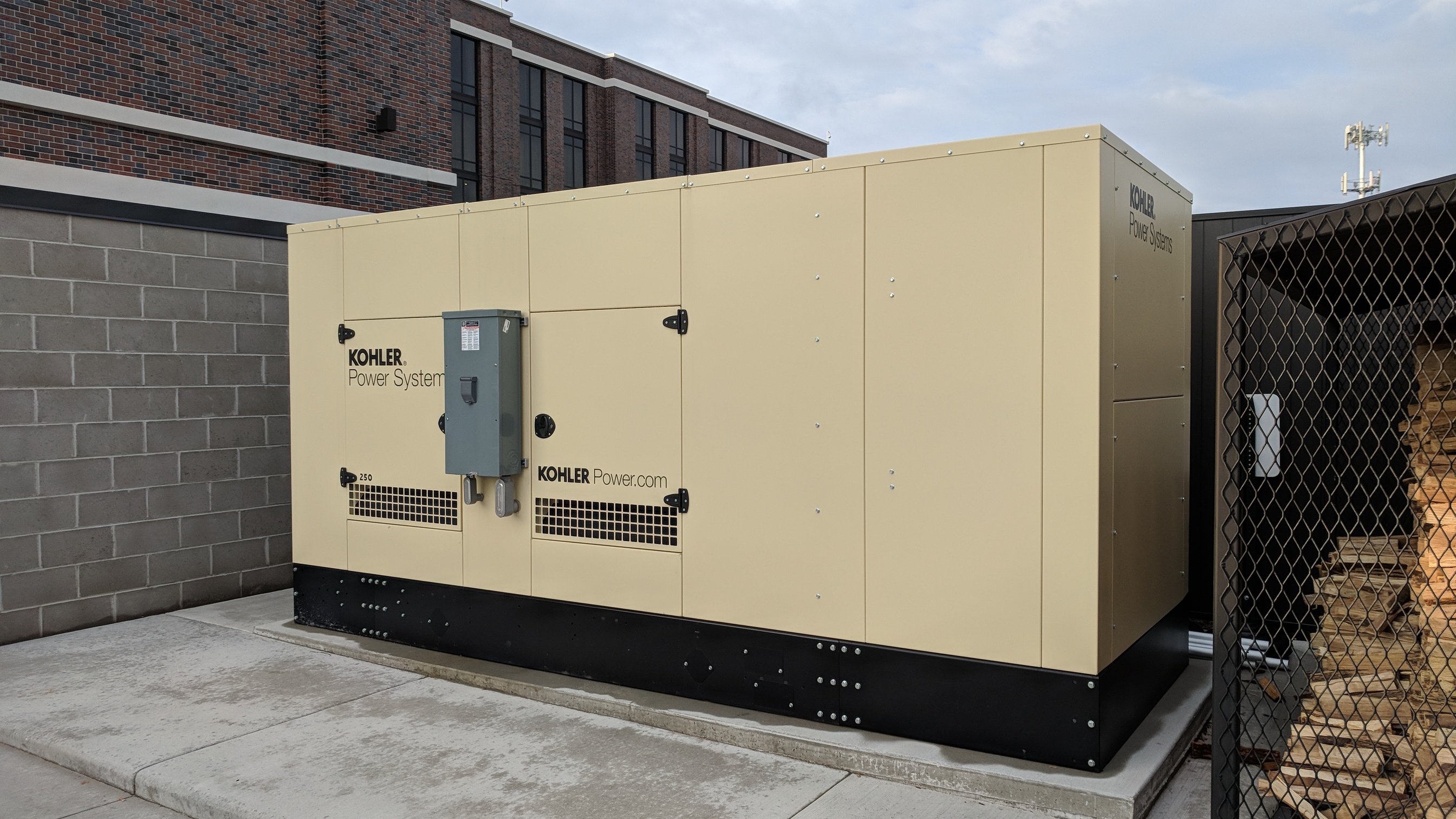 . . . and of course they have a Kohler back up generator!! 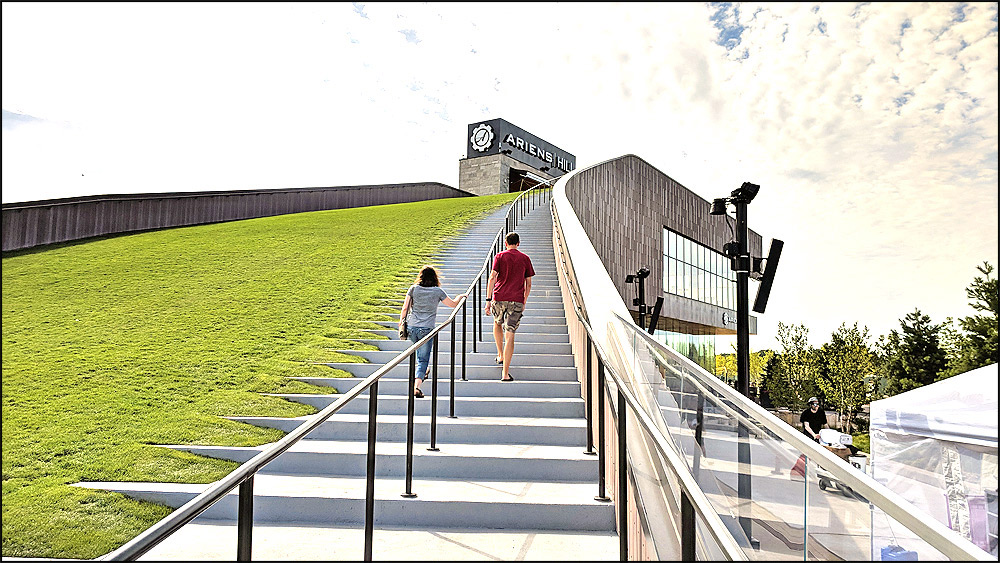 The Packers evidently bought up much of the land on the west side of the stadium and are constructing a ‘village of sorts’ named ‘Title Town’ with a sledding/observation hill . . . 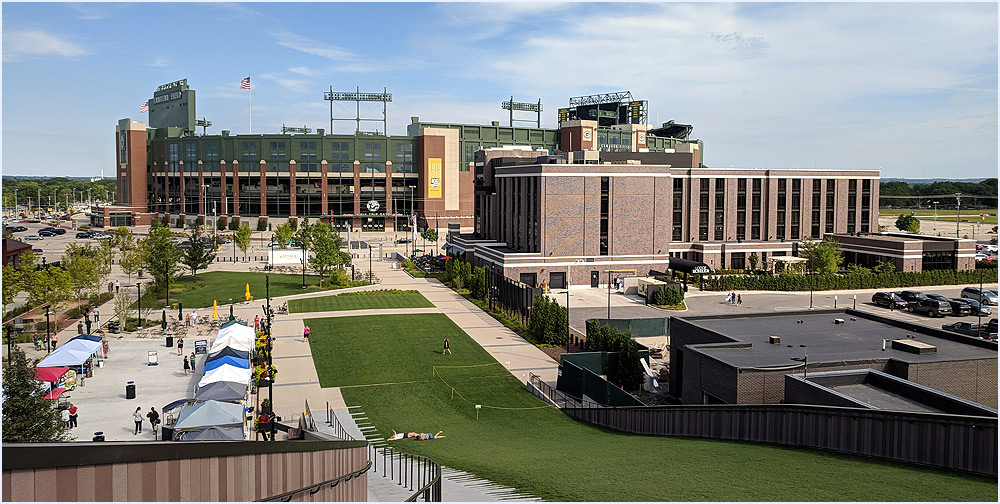 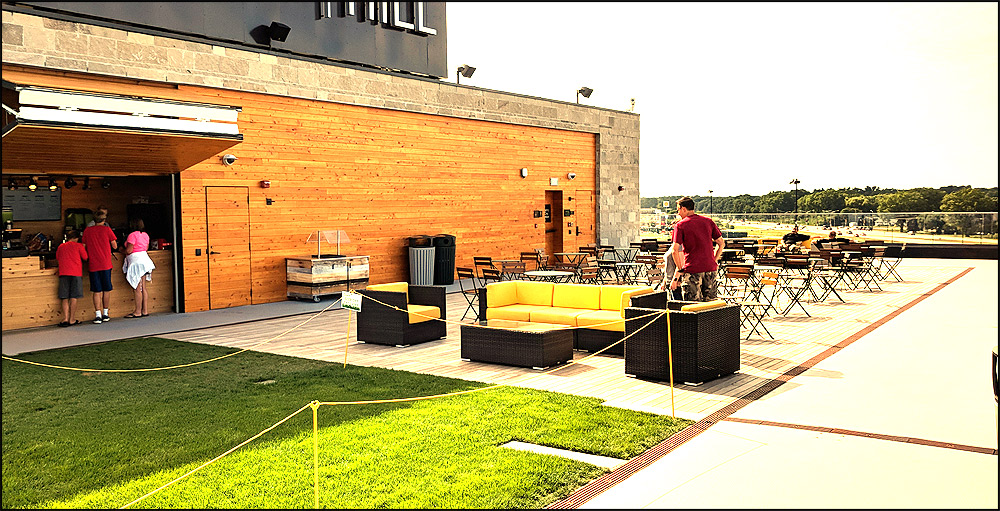 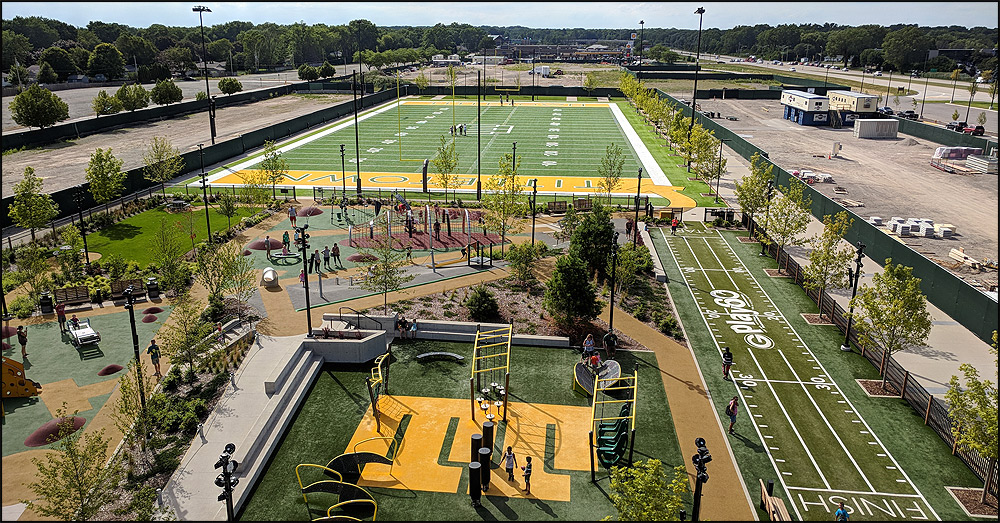 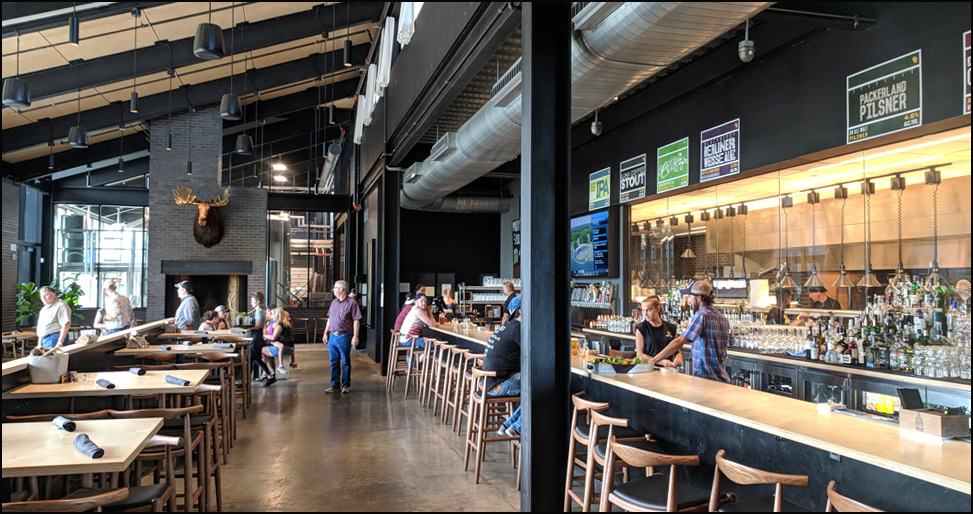 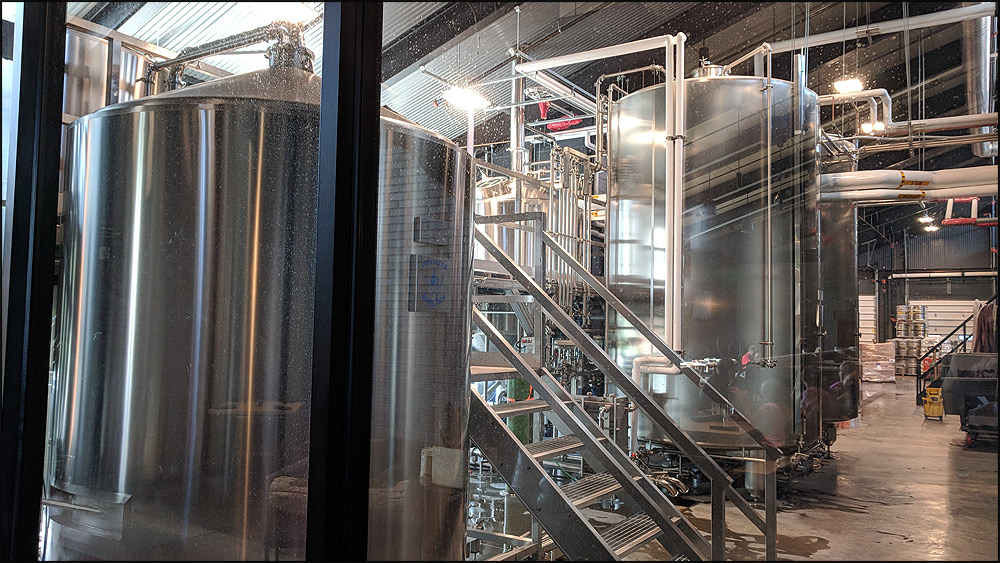 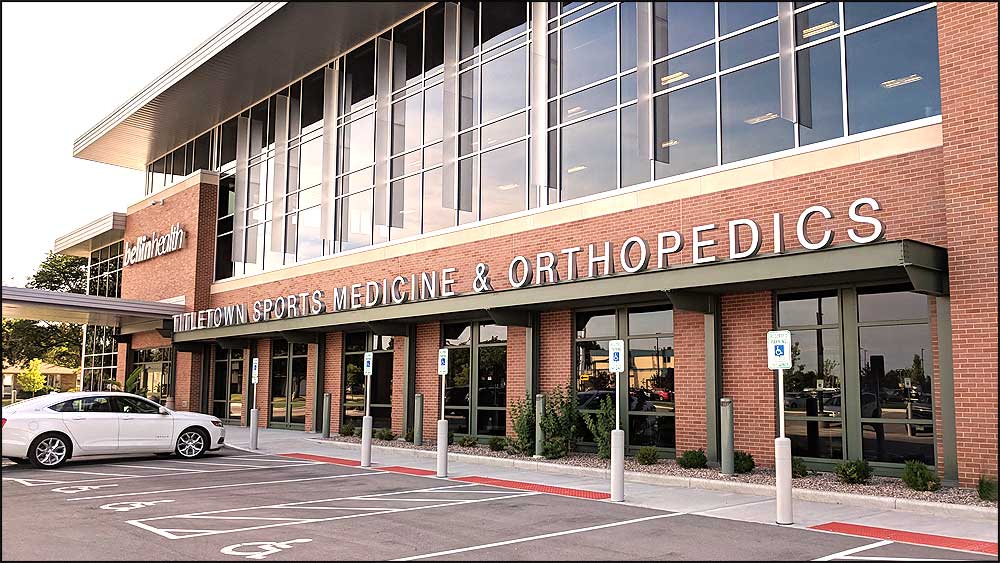 . . . and even an on site sports med facility complete with MANY handicapped parking spots for their patients!!!

The Packers stadium complex is HUGE . . . 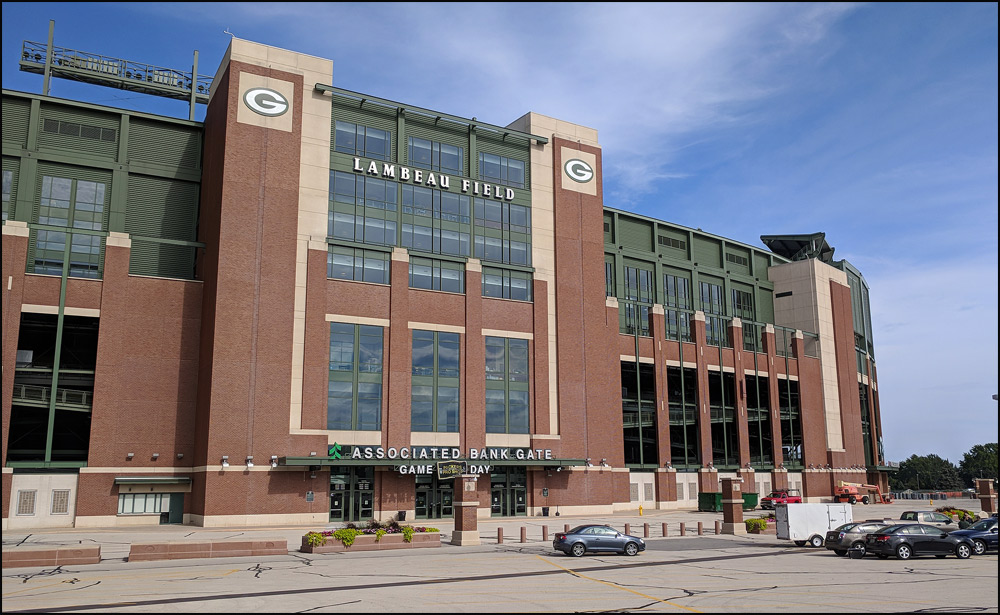 and has become a destination stop for many local, national and international visitors!! 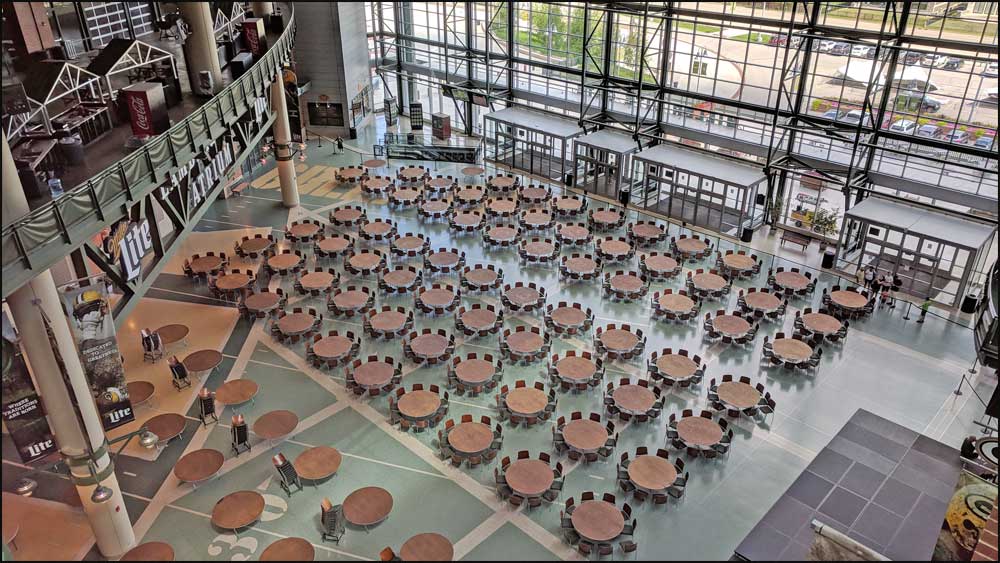 The new addition houses all of the Packer organization and has three floors of meeting space. Here is a view from the top floor down to one of the main floor seating areas, now set up for a Packer Hall of Fame induction ceremony being held this weekend. 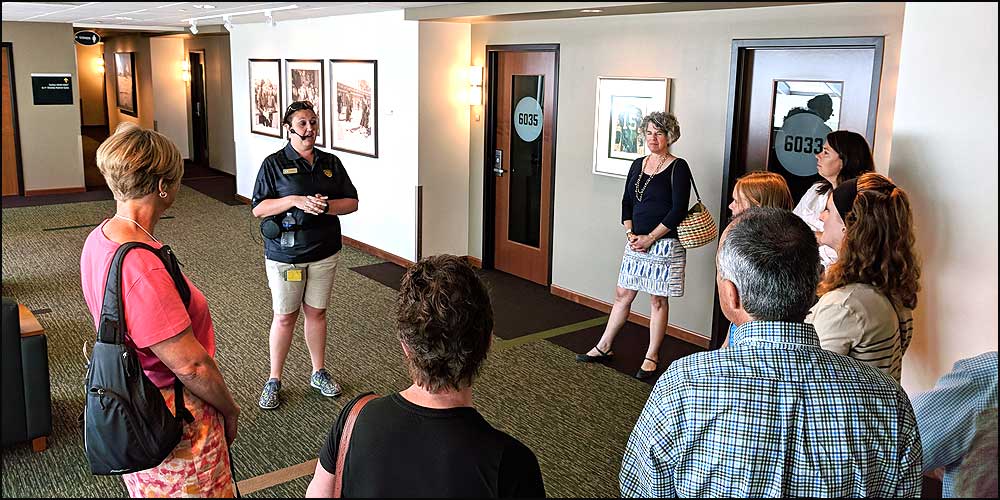 . . . stopping to take in the view from one of the larger private boxes. 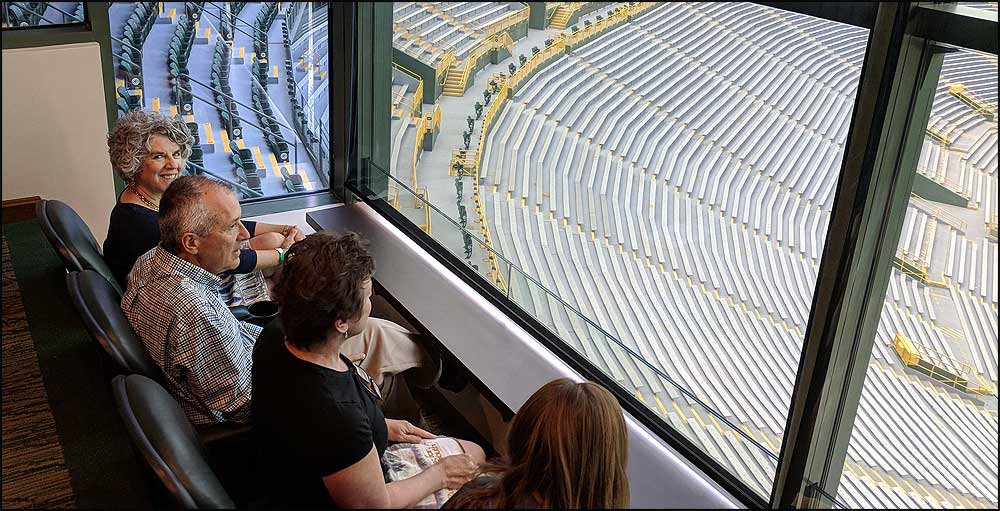 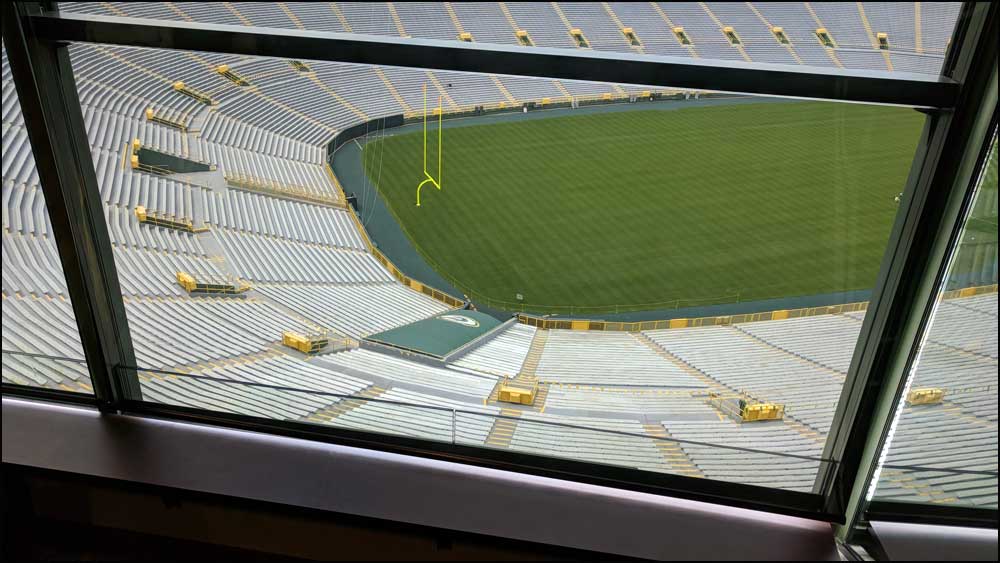 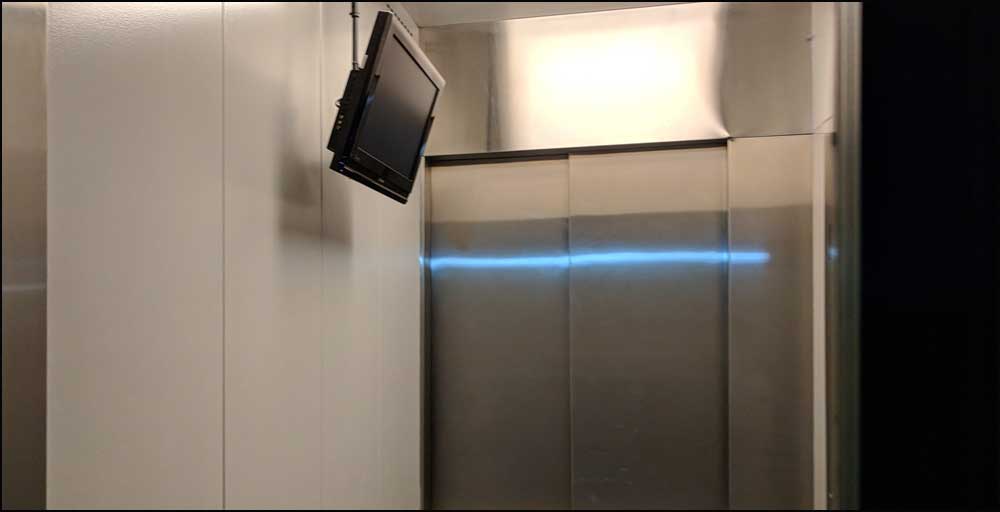 . . . even the elevators have TV screens so you don’t miss a moment of the action during a game.

The closest we got to the locker was this panorama photo. The room is oval so no player can ‘hide in a corner’. The lockers are grouped by quarterbacks, running backs, etc. The large rug in the middle serves as a meeting spot for a pep talk right before the game, coaches comments and a prayer that is said before each game, not for the purpose of hoping to win the game but instead for a safe game for all players with no resulting injuries.

A portable version of the rug is take on the road for away games!!! 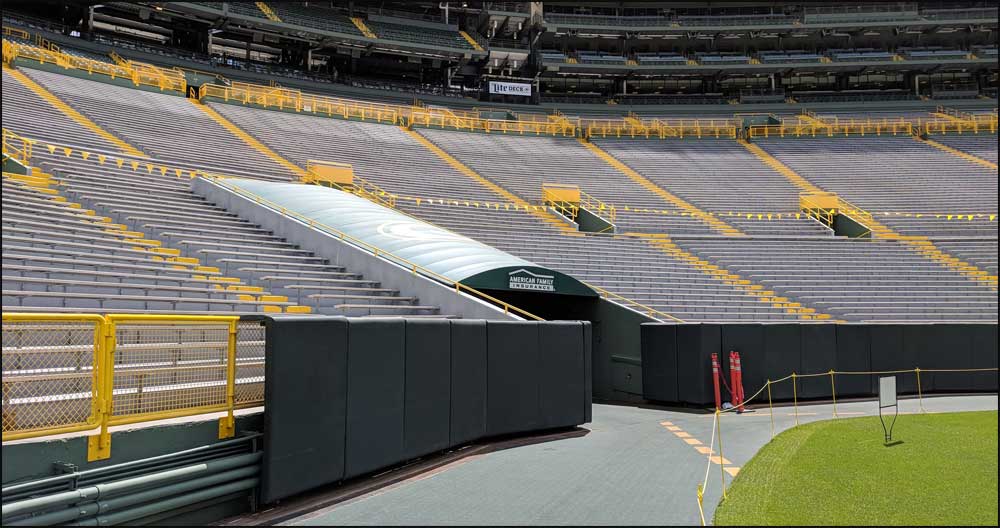 This is the famous tunnel the Packers use to enter the field . . . 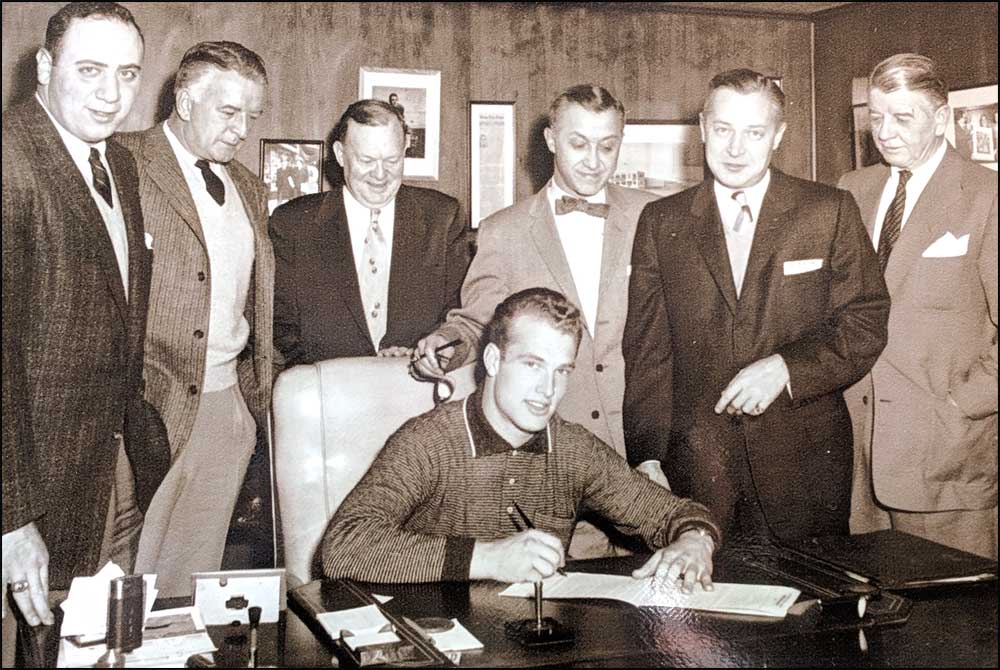 . . . a verison of which has been used since the club was formed and signed one of their early stars, Paul Hornug.

When the stadium was remodeled, to add a sense of tradition,  some of the bricks of the old tunnel were incorporated into the new tunnel  design . . . 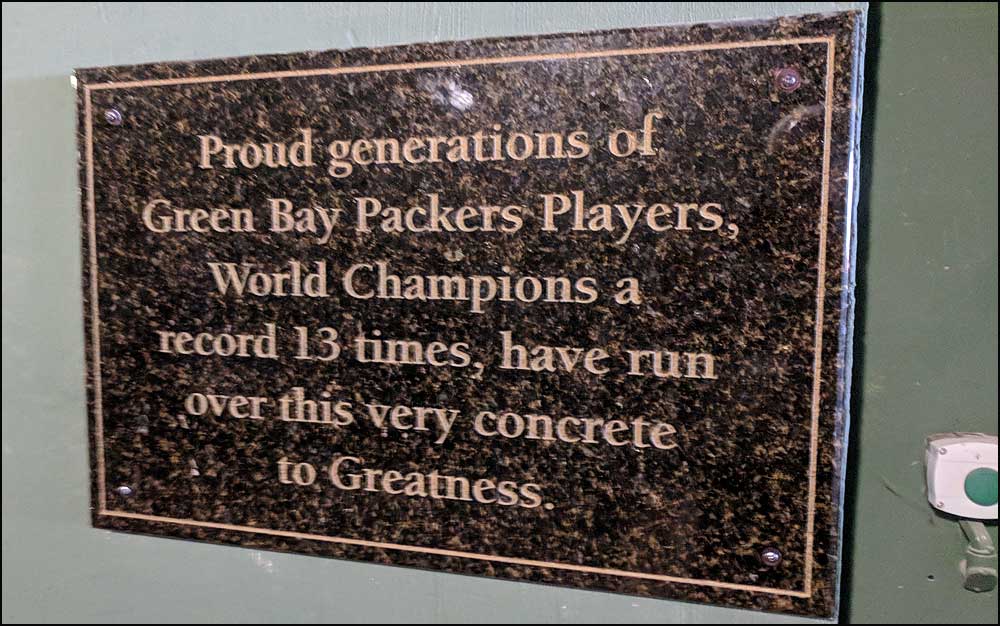 . . . today when players enter the field they jump on the old bricks and pat this sign for good luck, as they run through the tunnel. 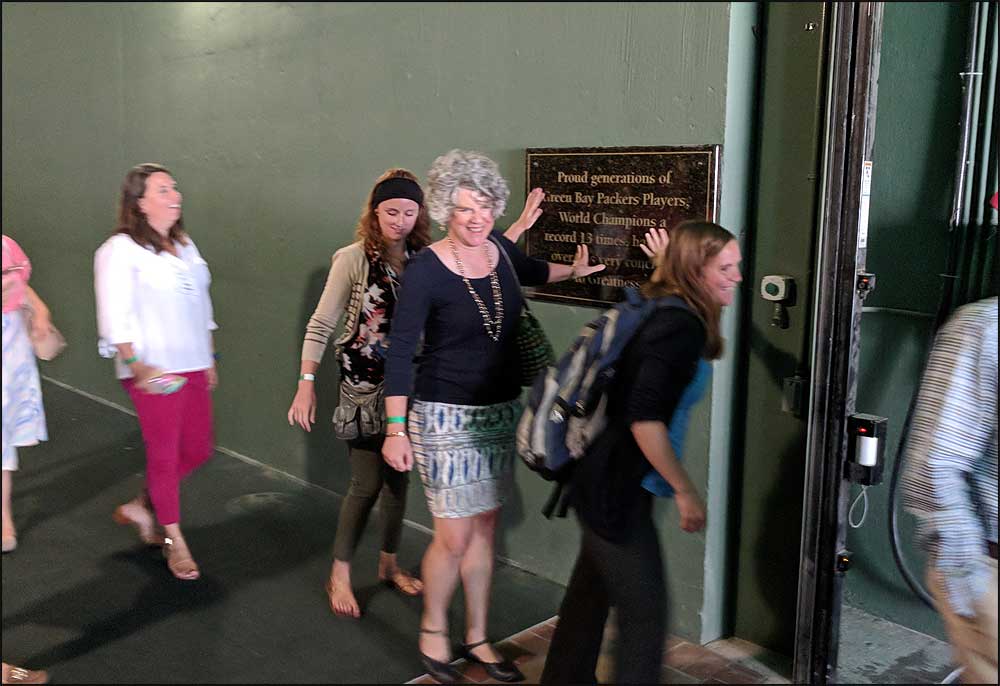 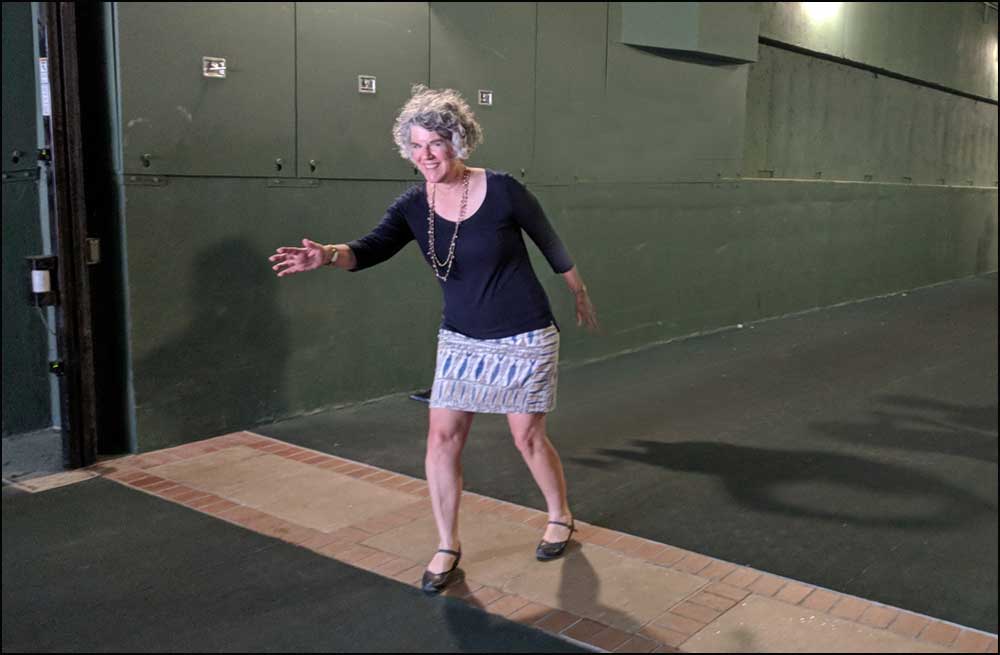 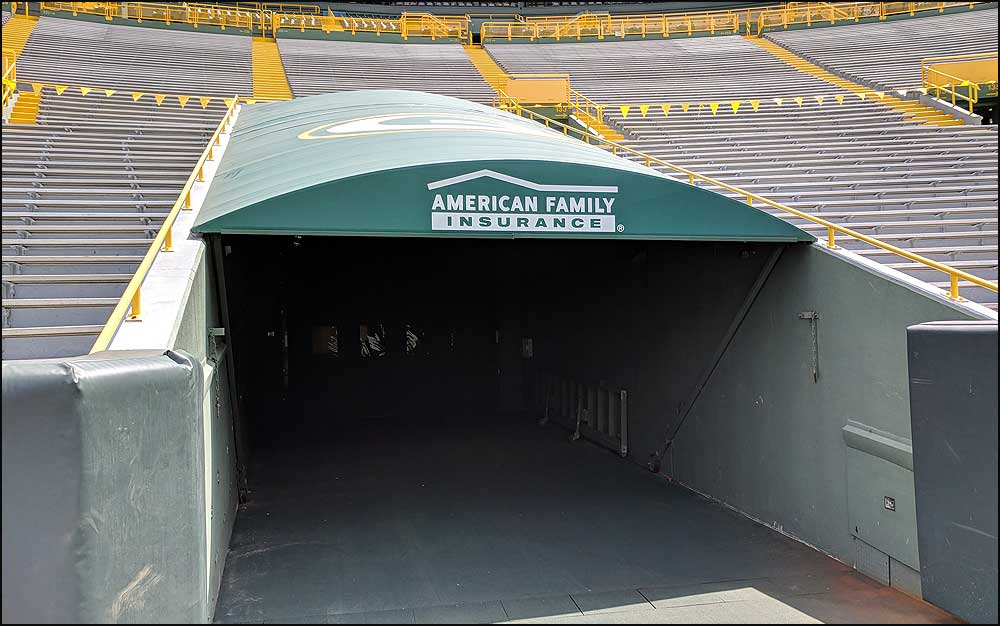 . . . right after the new stadium addition was completed my American Family Insurance premiums seemed to go up . . . wonder how much of it went to help pay for these naming rights!!!! 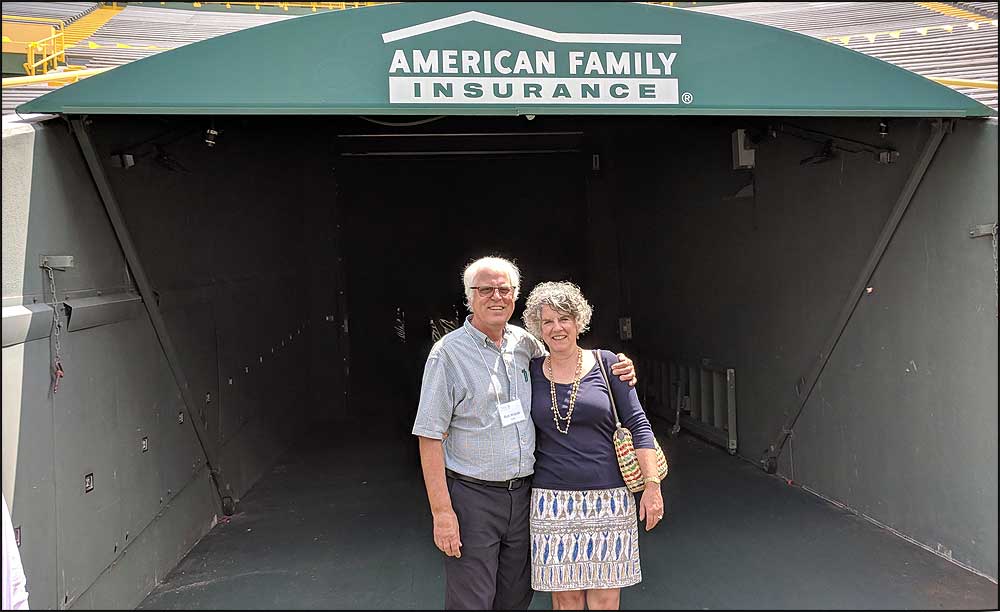 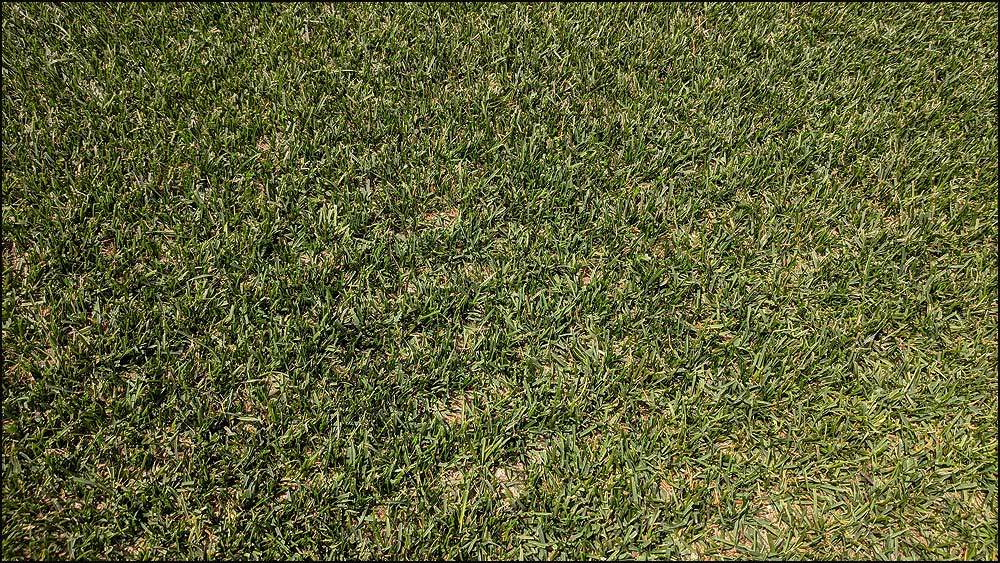 Oh, they don’t use ‘Astro Turf’ anymore. The surface of plastic and real grass is grown over a bed of compacted sand. The 7 inch plastic fibers are sewn into a porous membrane, threaded down through it and back up, forming a ‘U’, then cut to a 1/2 inch height above the surface of the field. Millions are used in the process and there is enough room left between the threads to allow real grass to grow.

During the season the grass is cut every other day. There is also a ‘heated pipe’ system buried below the surface used to ‘wake the grass up’ during the freezing season . . .

170 gallons of bio degradable paint is used, each game, to ‘line the field’!! 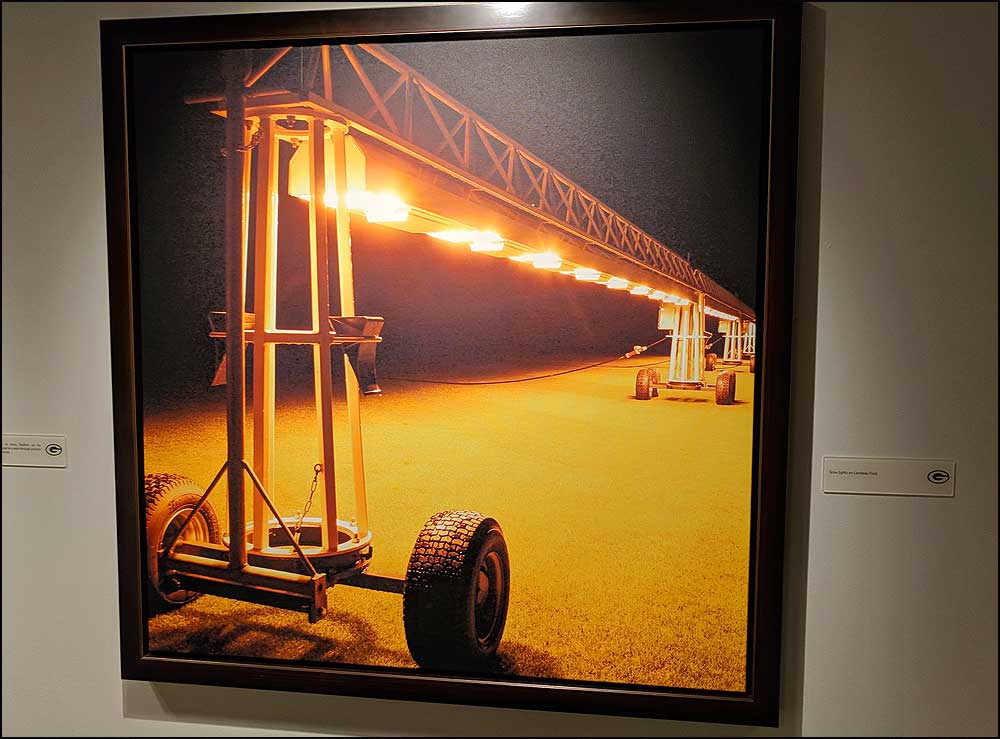 And when the grass needs to grow during the ‘off season’ they use lots and lots of “Gro Lights’ to make force the turf to grow outside the ‘normal’ growing season. The lights are shared with the Brewer’s Milwaukee stadium during the non football season. 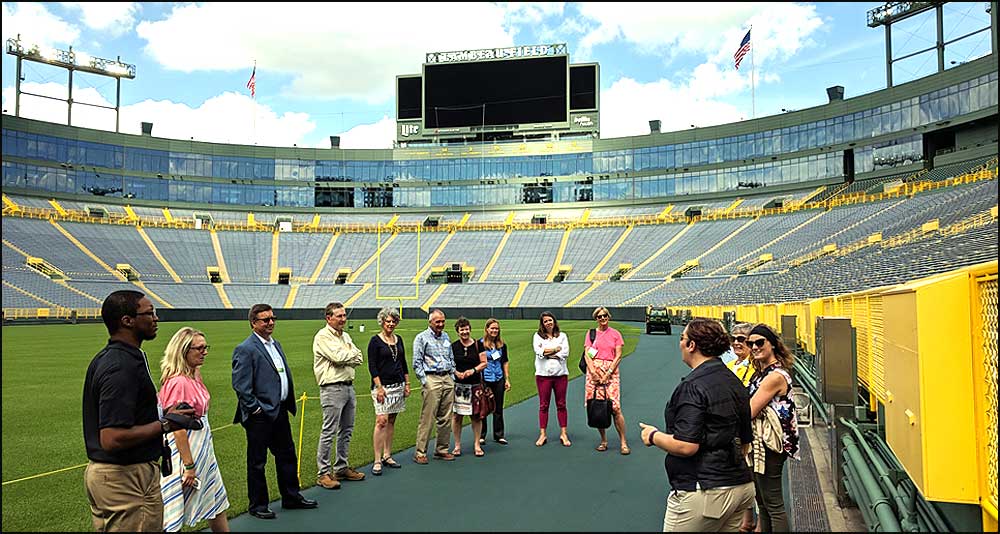