Can’t get the song ‘Ventura Highway’ out of my head . . . as usual in life there is always more to the story. Ends up the group America’s member Dewey Bunnell had the inspiration for the song when he was on a road trip, as a child, with his family and as they traveled through Vandenberg Air Force Base they had a flat tire on their car . . .  guess who else had a flat on the highway in Vandenberg Air force base???? 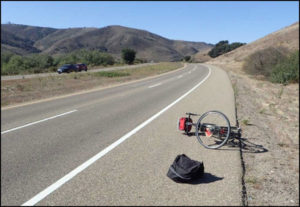 . . . and there really is no Ventura Hwy, only in one’s mind. The name may have been in reference to Hwy 101, which runs through Ventura. We spent most of our trip on Hwy 101 and Hwy 1.

. . . and it ends up one of the more colorful governors from my home state of MN liked the song too. As Dewey tells it, “The song won many fans, including the pro wrestler-turned-politician, Jesse Ventura. Bunnell recalled, “We went and played at Governor Jesse Ventura’s inaugural out in Minneapolis. He asked us to — his wife is a horse lady, and she’d always loved ‘A Horse with No Name‘, and he had adopted this name Ventura. So when he put together his cast of characters for his big inaugural celebration, he wanted us to come and play two songs, which we did”

I tend to consider four components of a trip: the scenery and culture; the accommodations; the environment and the food. Two A+’s, a  B and a C-.

A+ The scenery and culture was just as you would expect in WA, OR and CA giving us plenty to see from the deep forests of WA state,  to the redwoods, to the urban area of LA, to the desert of southern California. Sleet, freezing temps, rain, mild headwinds and BEAUTIFUL sun on your face . . . we had it all!! The people of CA  were the kindest, never honking at us, giving us the finger, trying to squeeze you out of the lane or coal rolling us. They have embraced the bicycle culture!!!

A+ the food on this trip was GREAT . . . no one pot meals like when you are traveling self supported. Everybody pitched in, took their cooking seriously and turned out some wonderful meals. What a difference van-support and three BIG coolers can make!!!!

B  The weather was an issue. Touring so late in the year the temps were routinely dipping into the 30’s at night with our lowest being 25 degrees, waking to frozen water and ice on the tents. LOTS of rain in the first several weeks, but it is the Pacific NW, you know. A bigger issue to me was the short amount of daylight. Usually we were eating breakfast in the dark. Most would get into camp between 2 and 4pm, with dinner at 6:00pm. When we had our map meeting at 7:00pm we were losing daylight and it usually ended in the dark. No ‘sunlight time’ to dry anything out. I would not recommend traveling like this so late in the year . . . the yang to that though is, there were probably fewer tourists on the roads!!!

C- Many of the accommodations were, as our past British riding partner David would say, ‘Unacceptable’. The parks we stayed in rarely had all the facilities working, something was ALWAYS broke. It became an issue of how many ‘Out of Order, Sorry for the Inconvenience’ signs one would see. It was the tail end of the camping season, most the of parks had laid off their seasonal staff, and I think a lot of repairs were going to wait until winter. No power, sometimes no water you could drink and no hot water for showers happened far too often. If you like to camp, most of the campgrounds were in picturesque setting, it’s just the ‘creature comforts’ were lacking’. At sixty-six I’m getting too old to wander around in the dark looking for the bathroom (no lights in most toilet shower buildings, inside or outside’ . . . bring your headlamp!!!).

Of course the real plus of these trips is traveling with the gang that quickly becomes ‘family’. We were all in it together and shared the good times, and the bad. This group was about half women so it was a lot more FUN than just a bunch of old guys (the norm on these types of trips I have ridden).

I returned home to MSN on a Thursday, to 4 inches of snow and airline delays, but made it home for emJay’s last day of work on Friday. I missed her official going away party but made it, on Friday, to the ‘taco bar luncheon’ held at her office with her immediate ‘TNC family’ It was truly a happy time with lots of laughs and a few tears.  GREAT send off. She turned in her key and credit card and walked out the door,  unemployed after 38 years with The Nature Conservancy!!! (Although she does have one more meeting on Monday!!!).

Now . . . it’s time for continuous FUN together as we travel together down our own Ventura Hwy, ‘in the sunshine, where the days are longer, the nights are stronger than moonshine ‘ beginning with a bike trip for a month in Thailand.